Like all wild animals, the seasons dictates the way wolves live, the following is a typical seasonal cycle of the gray wolf

In winter the wolf's thick coat keeps them warm even on the coldest nights, they have practically no body heat loss through their fur (snow will not melt on a wolf's fur), At night the wolf curls up, it covers its nose with its long tail. What this does is hold the warm air exhaled over the feet and nose, warming them. When the wolf inhales the air is filtered through the tail and is warmed by the exhaled air before it is breathed in.

The Wolf will feed heavily in the fall, just before winter. Hunting is difficult in the winter, the pack may have periods of inactivity and extra stores of fat will help them survive in these times. When spring finally comes the wolves emerge, this is a time of great excitement for the pack, often they run a round and play with each other, but after this short interaction it is time to feed.

Depending on the depth of the snow, wolves will choose a path that is easy to follow, The alpha wolf will form a single file line, the rest of the pack will follow, with the pups last. They will follow old game trails, frozen lakes and other paths of least resistance.

When hunting in winter the wolf will conserve energy whenever possible, by following the same trail as the prey animal, staying upwind, and staying out of sight of the prey as long as possible. When it is time to strike the wolf will start wagging their tails with excitement. Some times when young pups are with the hunt they may dash after the prey in the excitement and spoil the hunt.

Wolves will more likely prey on young, sick or older animals past there prime, but the wolf being opportunistic will hunt a strong healthy animal.

In late December the female wolf will go into heat, at this time the alpha pair will start a courtship or bonding, within five to seven days the pair with copulate several times. As with the dog, the bulb at the end of the males penis expands in the females vagina, locking the two for a period of up to thirty minutes.

In the spring the wolf devotes it time to digging or remodeling an existing den (both male and female wolves take part in making the den). The den is only used for birthing and rearing the young, all wolves sleep outside all year long.To Learn more about dens, Click, here.

Birthing: The wolf's gestation period is sixty-three days. She will hunt with the pact up to the birth. At this time the den become the focal point for the pack. A week or two before the birth, she will stop hunting and spend her time in or around the den. Around twenty-four hours before she will remain in the den. 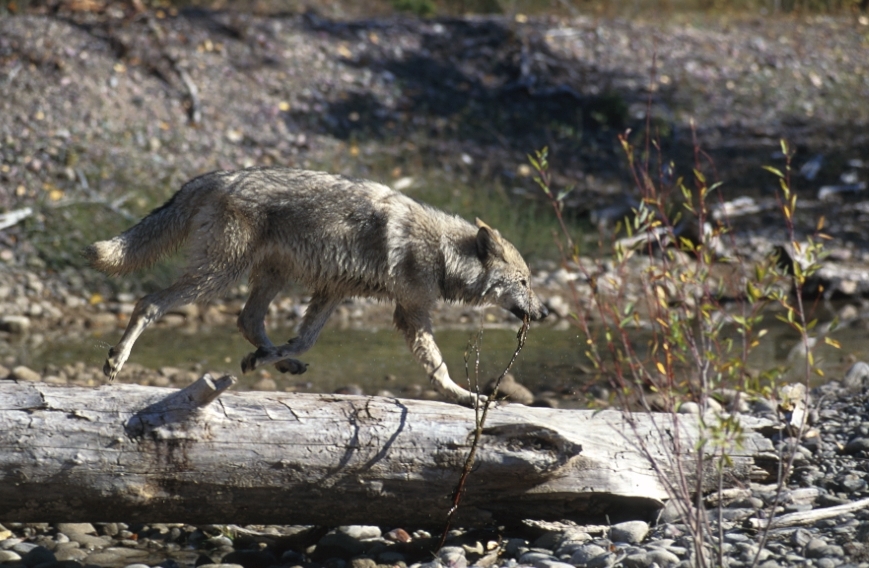 The summer is a time of growth, the Winter coat is long gone, replaced by a short summer coat.

At This time the pups are still using the den, the mother will again start hunting with the pact, the pups are never left alone. This is a time of play and fun for the pups, the adult wolves put up with a lot of puppy abuse!. At about eight weeks of age they abandon the den and move to a 'rendezvous' site. these areas are more centrally located to the area that the pack is hunting.

This is a time the young wolves learn to hunt, eventually they will be part of the hunt, there place in the pack will also start to be determined.

Most of the wolves' activities take place at night, this is to avoid the heat of the day. The wolf will follow the gravel bars and river beds, they will also keep to the high ridges for a good view of possible prey.

They way wolves hunt in the summer is similar to winder hunting, but they are not hampered by the elements. 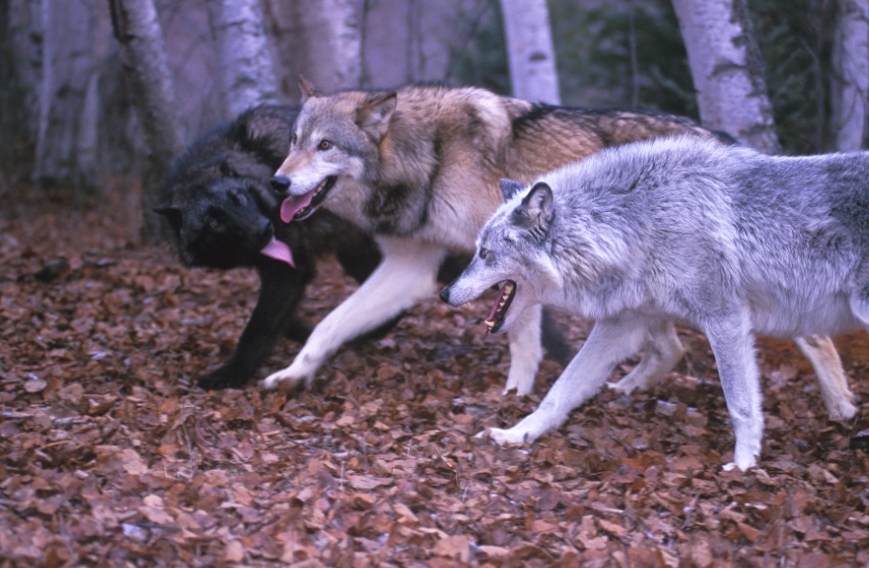 The wolves now begin the winter preparations, the wolf's coat becomes deep and dense. Wolf pups at this time know about snow instinctively, yet the first experience with snow is a exuberant experience for them.

The pups have now been on the packs hunts, they still have much to learn. At this time the young wolves are around 50 pounds, they will not reach there full size for months to come. The pack will now have to migrate with their prey, for the predator must stay close to the prey species. The fall is a natural dispersal time for most wild animals. Some wolves (those at two and half years) may leave and find mates and to start their own pack.