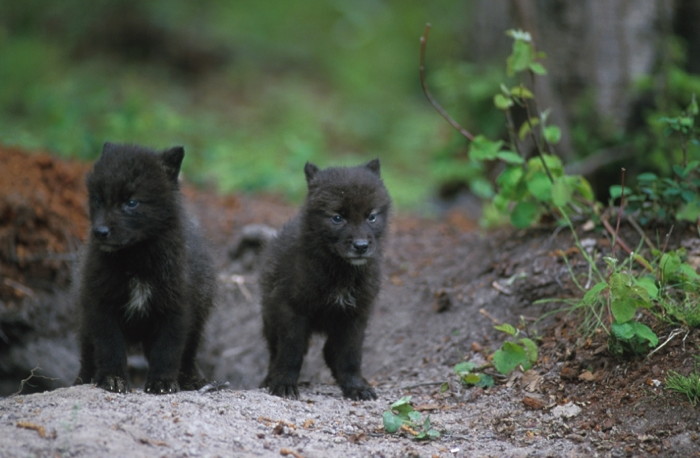 In a normal den, the birthing chamber lies at the end of a tunnel that may be up to 15 feet long in soft soil. The den is often slightly elevated above the rest of the tunnel, and no den-lining material is used. The mother keeps the den clean by eating fecal mater of her pups. The birthing chamber is usually about three feet in diameter and about two feet high.

Shortly before giving birth, a pregnant female will seek out a den. Dens may be a deep riverbank hollow, a cleft between rocks, a hollow log, a space under an upturned tree or a space under a rock overhang. Sometimes wolves will use abandoned dens of other animals, such as bear dens or a beaver dam. 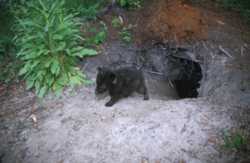 Dens are often reused by generations of wolves; one den in Jasper National Park was used by wolves eight times in fifteen years. One on Ellesmere Island may be even older, since bones dated at 783 years old.

The entrance to the den is about 20 to 28 inches wide and 15 to 20 inches high. Dens may have two or more entrances, both of which are usually marked by a large pile of dirt. Den sites are often near a source of water, and are often elevated so that wolves can detect approaching enemies.

The Alpha male is very protective of the den. He will often act as a decoy, leading predators (bears and even eagles may prey on a very your pup) away from the site. Although wolves will often stand their ground against wild predators at the den site, they will usually run away for the approach of humans.

Wolves may change dens though the year, moving their pups a mile or more. This may occur because of parasitic infestation of the den or because of a disturbance of the den by humans or other animals.