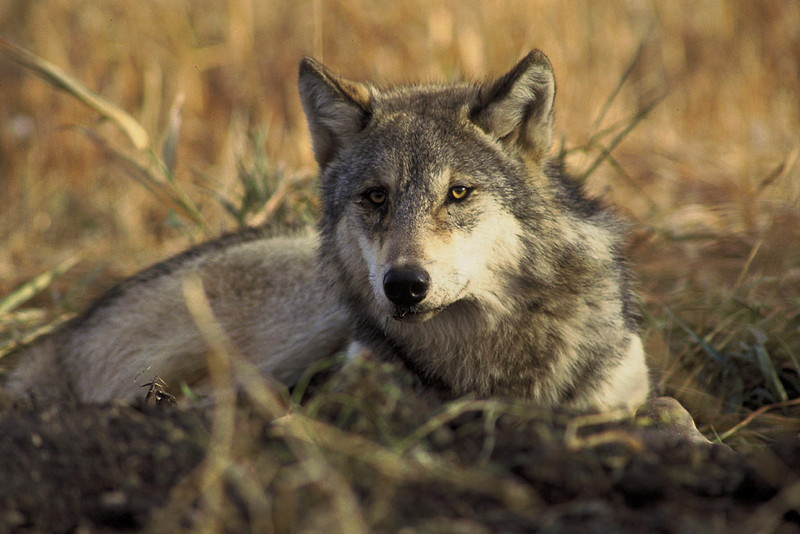 (above image from U.S Fish and Wildlife National Digital Library)

The wolf is a large member of the canine family. It is not known for sure just when the divergence occurred that split the ancestors of our domestic dog, C. familiaris, from the grey wolf, C. lupis, but it us thought to have occurred about four million years ago

Early man was probably followed by a wolf like creature that scavenged on the remains of his kills. In time, the creature sacrificed his freedom in exchange for those remnants. The dog, for so the creature turned out to be, was not the only one to gain from the exchange. In time the dog learned how to help the man in his hunting, guarding the herds of other animals that the man domesticated, was sometimes used as a beast of burden and, at times, even protected man from other animals.

The Wolf has developed the capacity to survive in the most inhospitable of climates. The wolves in the high arctic endure several winter months of perpetual darkness. Even in February when sun returns to the north, temperatures of -40°C and bitter winds are common. Other wolves are at home in the desert and the dampness of a humid Gulf Coast swamp.

Although most wolves have basically grey coats, hence the common name, the coats usually have a lot of base yellow interspersed between the salt-and-pepper fey and black hair. Wolves anywhere can have coats that grade from almost pure white to jet black, although all of the arctic wolves are usually all white.

Wolves are very intelligent creatures whose upright ears, sharp, pointed muzzles, inquiring eyes, and other facial features instantly convey this quality. Their heads closely resemble that of a german shepherd dog, although the skull is broader and more massive. Wolves also have ruffs of long hair framing the sides of their faces like sideburns.

Most of the adult grey wolves weigh in the vicinity of 75 to 125 pounds (34 to 56 kilograms). Males are usually larger than females by as much as twenty-five percent. There are authenticated records of male wolves weighing as much as 175 pounds (79 kilograms).

As large as wolves are, they usually appear to much larger because of their long hair. In the winter coat, the hair on their back and sides averages 2 to 2.5 inches (5 to 6.3 centimeters) in length. Starting at the base of the neck, the wolf has a teardrop-shaped mane of hair that elongates into just a crest down the spine toward the tail. Over the shoulder, the mane is about 6 inches (15.2 centimeters) wide. The hairs in the mane are 4 to 5 inches (10 to 12.7 centimeters) long and are attached to erectorpilli muscles, which allow the hairs to stand on end, making the wolf appear even larger. 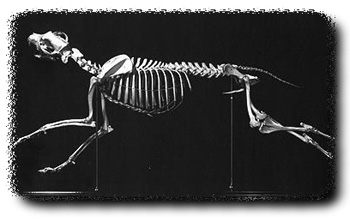 Extensive studies of the North American wolf species show between 50 to 70 inches (1.3 to 1.8 metres) in total nose-tip-to-tail-tip length. Of that length, one quarter is tail length.

Wolves Stand between 27 to 31 inches (68 to 78 centimeters) high at the shoulder. Compared to dogs of the same size, wolves' chests are much narrower. Their legs are also longer in proportion to their body weight than are most dogs. Because of its narrower chest, the wolf's left and right foot tracks closer together than the dogs.

The wolf has very strong jaws. According to Barry Lopez in Of Wolves and Men, the jaws of a wolf have a "crushing pressure of perhaps 1,500 (lbs/square inch) compared to 740 (lbs/square inch) for a German Shepherd." The dentition of the wolf consists of twenty-two teeth: twelve incisors, four canines, sixteen pre molars, and ten carnassials and molars. The canines of the wolf are 1-inch (2.54 centimeters) long, strong, sharp, and slightly curved. These are the teeth used for grasping prey. The wolf does not chew its food, using its carnassials to scissor off a piece of meat that can then be swallowed in a manageable chunk. Having strong jaws allows the wolf to crush bones to get to the soft marrow, it also helps the wolf eat most of its prey leaving very little waste

Humans are plantigrade, walking upon our entire flat foot, sole to heel. All members of the canine family, and the feline family too, are digitigrade, walking upon just their toe tips. Unless a wolf is lying down, the heel of each foot does not come in contact with the ground. The front feet of a wolf are exceptionally large. This is of great advantage to the wolf when it runs upon snow, as it allows greater weight distribution and more support to prevent the animal from sinking in as deeply when the snow is soft.

The wolf has five toes on each forefoot, but only four are actually needed. The fifth toe, corresponding to our thumb, has regressed. It is found up on the middle of the foot and is known as the dew claw. There are just four toes on each of the hind feet. Each toe pad is surrounded by stiff, bristly hairs, which act as insulation and also provides a better grip on slippery ice surfaces. The claws are strong and blunt because the tips are worn off by constant contact with the ground. These are used for digging and in gripping the earth while running, not for seizing prey.

Wolves walk, trot, lope, or gallop. Their legs are long, and they walk at about 4 miles (6.4 kilometers) per hour, but can reach speeds of 35 mph during a chase. Their usual mode of travel is to trot, which they do at various speeds, generally between 8 to 10 miles (12.8 to 16 kilometers) per hour.

Wolves do not run at full speed until they get close to their prey as possible. At that point, they make a high-speed chase to test the animal.

Wolves can keep up this pace for hours on end and have been known to cover 60 miles (96 kilometers) in a single night. They have been clocked at speeds of over 40 miles (64 kilometers) per hour for a distance of several miles. 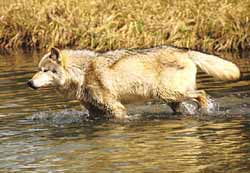 The wolf is very comfortable in the water, and does not hesitate to wade through icy streams or swim across short stretches of lake. In summer, wolves often bathe in streams to keep cool, and they will readily follow prey into water.

Wolves have been known to wash mud from there coats in rivers and streams, wolves depend on thier thick coats in winter, so it is not surprising that they spend part of thier leisure time in grooming behavior. It is also likely that the grooming of other pack members helps reinforce the social bonds the tie the pack together. Two wolves will lick each others coats, nibbling gently with thier teeth to remove foreign matter. Reciprocal grooming is especially common during courtship. Injured wolves are intensely groomed by other pack members, providing both physical and mental comfort.

Wolves love to play, shouldering one another, bumping bodies together, flopping tails over each other's backs, and leaping up placing forepaws around other' necks. Play especially in pups, develops strength and hunting skills, and aids in establishing pack communication and hierarchy. The intention to play is often signaled by the gesture well known to dog owners of dropping the front quarters into a crouch position, with smiling face and wagging tail. Adult wolves stage mock fights, play chase, and leap on each other. The ambushing of unwary pack members is a favorite game. 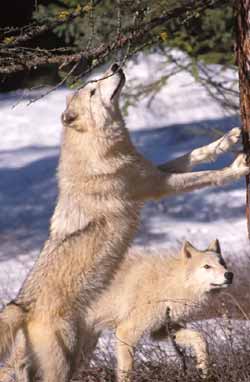 Scent plays a very important role in the life of the wolf, by smell alone wolves can locate prey, other pack members or enemies. It can tell them if other wolves were in the territory, if they were male or female, and how recently they visited.

The wolf has several specialized glands, one around the anus and another on its back about 3 inches (7.6 centimetres) in the front of the base of its tail. The scent from these glands is as individualistic as are out fingerprints and is used by that particular wolf as its personal calling card. These Glands are used as to mark boundaries and also to mark trails. These "Scent Stations" are often 100 yards (91 metres) apart.

The wolf use scent to mark territory, establish position of site of a kill and other factors within the pack.

The Alpha wolf will direct urine at stumps, rocks, or trees this marks the packs presents to the members of the pack and other wolves. Wolves from rival packs may mark over the existing scent mark to obscure its odor. The marks may also be used as a boundary or fence post acting as a direction system.

Lone wolves don't use Raised-leg urination (captive wolves have been known to urinate in ponds or streams).

Wolves have been known to paw or scratch the ground or trees, this may release odors from glands in the paws or as visual markers to pack members and other wolves.

The sense of smell in the wolf is highly developed, as would be expected in an animal possessing numerous scent glands. The distance at which any scent can be detected is governed by atmospheric conditions but, even under the most favorable conditions , 1.75 miles denotes a particularly keen sense of smell. The wolves usually travel until they encounter the scent of some prey species ahead of them. They then move directly toward their prey in an effort to capture it.

Next to smell, the sense of hearing is the most acute of the wolf's senses. Wolves can hear as far as six miles away in the forest and ten miles in the open. Wolves can hear well up to a frequency of 25 khz. Some researchers believe that the actual maximum frequency detected by wolves is actually much higher, perhaps up to 80 khz (the upper auditory limits for humans is 20 khz), also according to some naturalist wolves' hearing is greater than that of the dog.

Wolves also have keen eye sight and are quick to detect the slightest movement of anything in front of them. Being major predators, thier eyes are on the front of there heads, and they have probably a little less than 180-degree vision, unlike their prey species, which can see over 300 degrees of a circle.

Investigation of taste are made difficult by the fact that the influence of smell often plays a major role in the way a food "tastes." It is known that canines possess taste receptors for the four taste categories: salty, bitter, sweet, and acidic. Felines on the other hand, do not respond to sweetness. The sweetness receptivity would be adaptive use to wolves, as sweet berries and other fruits do play a minor role in their diet.

Wolves live in family groups called packs. A pack is usually made up of a male parent, a female parent, their pups and a few other adult wolves who are the older brothers and sisters. The pack works together to hunt for food and to take care of the pups.

Some members stay with the pack for life. Wolves can run up to 40 miles an hour and can easily cover 50 miles a day. It is highly likely that at one time or another the land your home is on was once the home of a wolf pack{greatest natural range of any mammal except humans}

In the wild wolves can live up to 13 years or more, in a protected wolf park or a controlled area of land, a wolf can live to be up to 16 years old. But most wolves usually live to be to around 8 years of age. The record wolf life span is about 20 years of age. Life in the wild is difficult for the wolf, with human population taking up more and more wolf habitat, and with those who would kill the wolf, a long life span is unlikely. In a controlled environment they can live longer because they are safe from the outside dangers of traps, snares,enemies and poisons.