Wolves predominately prey on hoofed animals including Deer, moose, Bison, Elk, and caribou. Because wolves usually hunt for large animals, (although wolves are opportunistic and will eat smaller prey) they work together to catch their prey. Wolves will eat a healthy, strong animal if they can catch it. (Wolves need an average of three to ten pounds of meat each day). 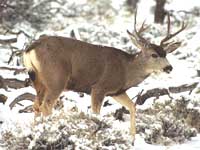 Wolves will also eat grass to purge their digestive system when they have eaten something that does not agree with them. Food sources may differ and change depending on the season and geographical area, when large prey animals are scarce wolves will prey on mice, Rabbits and squirrels, these smaller prey do not provide a substantial part of the wolf's diet but supplement it when larger prey are scarce.

Beavers play an important roll as an alternative food source in the summer months, in some areas 60% of the wolf's diet is beaver.

One of the most odd part of the diet of wolves is fish! Biologist Bod Bromley once observed a wolf in Canada's Northwest Territories catch five fish in fifteen minutes in the Talston River.

Wolves will also scavenge, In one study of moose carcasses in Algonquin Park, of 30 moose only 4 were killed by wolves, the rest died of natural causes. 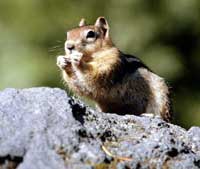 Wolves will also eat wild berries and other fruit as a minor part of their diet. 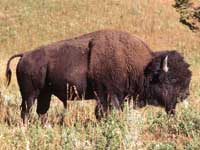 Beaver and Moose photograph from: