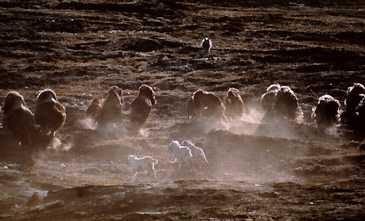 Wolves kill and eat other animals for food. Depending on where they live, wolves live mainly on the meat from such animals as deer, moose, elk or bison. They also eat beavers,rabbits and even mice. They do not eat humans. Wolves are not a threat to humans!

(There is no documented account of a healthy wolf ever attacking a human.)

Wolves are very shy around people and try to avoid them in the wild.

Wolves kill only to eat - to survive. Because wolves usually hunt for large animals, (although wolves are opportunistic and will eat smaller prey) they work together to catch their prey. Wolves will eat a healthy, strong animal if they can catch it.(Wolves need an average of three to ten pounds of meat each day).

Hunting is not always successful, so their bodies are designed to feast (eat a lot)or famine (eat nothing). Wolves can eat as much as 22 pounds of meat at a time and then may not eat again for many days. Wolves require from one to three quarts of water per day, depending on the size of the animal, the climate, and the moisture content of the prey.

When hunting in winter the wolf will conserve energy when ever possible, by following the same trail as the prey animal, staying upwind, and staying out of sight of the prey as long as possible. When it is time to strike the wolf will start wagging their tails with excitement. Some times when young pups are with the hunt they may dash after the prey in the excitement and spoil the hunt.

Wolves are primarily nocturnal animals that avoid the heat of day. They generally commence hunting at dusk.

After prey is detected, wolves may split up to search through brush, travel on ridge tops searching for the prey below, or test herds looking for signs of weakness.

It has long been recognized that wolves often take advantage of wear members of the herd. In 1804, Captain Clark of the famed Lewis and Clark expedition wrote that prairie wolves followed buffalo and fed "on those that are killed by accident or those that are too pore or fat to keep up with the ganges."

Later researchers reinforced the image of the wolf as a predator of the very young, the very old, the weak, of the diseased. Aldolph Murie, in the Wolves of Mount McKinley,wrote: "Many bands seem to be chased, given a trial, and if no advantage is gained or weak animals discovered, the wolves travel on to chase other bands until an advantage can be seized."

Lois Crisler notes in Arctic wild, "In all our time in the arctic, the only healthy caribou we saw or found killed were fawns with big herds." She observed that adult caribou killed had "hoof disease, or lung tapeworm, or nostril-cloging ... botflies." In a 1980 study in northeast Alberta, T. Fuller and L.B. Kieth found that "wolves killed disproportionately more young, old and probably debilitated moose (Ales alces), as well as more female calves."

In fact, the only animal that habitually preys upon prime mature animals is man.

Although it does not prey only on the weak and the ill, the wolf is opportunistic, and it is inevitably the disadvantaged that are the easiest to catch.

Weakened animals may show thier condition to predators through body stance, uncoordinated movements, the smell of wounds or infection, or some other tangible signal. The reading and evaluation of these signals comprises what Barry Lopez has poetically termed "the conversation of death."

Once a weak individual is selected by a pack, wolves will usually travel upwind. By traveling upwind, the sent of any prey will be carried to them. They will follow the air currents directly to the game. Or, they may follow the sent trail left by a game animal's foot tracks and body odors.

Just before the chase wolves prefer to make there final approach downwind so there body sent is not carried to the prey species, alerting it to their presence

Prey that runs is usually chased. Prey that stands its ground may be able to bluff off its pursuers. Moose and Elk often take to deep water or swift rivers and await departure of the pursuing wolves, But more often than not the wolves wait. While the majority of the pack rests, one or two members test the prey for signs of fatigue.

Usually the chases are short, but L. David Mech has stated that "One wolf I know of chased a deer for 13 miles."

David Gray described one such encounter in Canada's high Arctic in the musk-oxen of Polar Bear Pass:"the wolves approached to within a hundred meters of the herd ... one wolf lay down as two others circled the milling herd."

Contrary to popular belief, most prey chased by wolves actually gets away. In one study, only three percent of the moose that were tested ended up being killed. The percentage of prey that is killed is called the "predation efficiency," and in spite the wolf's prowess as a hunter, the majority of his prey escapes.

When the attack comes, the prey is usually seized by either the nose or the rump. Rarely, if ever, does a wolf hamstring a prey animal. This is one of the oldest and most pervasive false beliefs held about wolves. As late as 1980, the Aubon Society Field Guide to North American Mammals stated that the wolf kills "by slashing tendons in the hind legs.", this is pure myth. The actual death of the prey is usually caused by massive blood loss, shock, or both. Sometimes with smaller prey a neck bite will snap a backbone.

The Alpha wolf will eat first, Wolves usually begin to feed on the rump, if it was exposed during the chase, or else on the internal organs. The muscle and flesh is the last portion of the prey that is eaten, in contras with human habits. Having strong jaws allows the wolf to crush bones to get to the soft marrow, it also helps the wolf eat most of its prey leaving very little waste at the killing site.

Another myth is that packs are required to bring down large prey; several observers have seen single wolves catch and kill elk and moose. The first wolf to return to Sweden after the extermination of its wolf population regularly brought down large moose by itself.

There is evidence that wolves have some knowledge of proper prey management. L. David Mech found one pack in Minnesota that varied its killing by hunting in a different part of its territory each year, allowing prey numbers elsewhere to recover, aiding the long-term survival of the pack.

Wolves hunt out the weak, the sick, the old, and the injured. They help the population of prey animals like the elk, deer, moose, and caribou, by taking away the weak and letting the strong survive. This is important part in the ecological system. By enhancing the strength into the herds. Without animals like the wolf to eliminate the weak, old , sick and injured, the herd of deer would swelter. They would become so numerous that they would starve to death. The wolf helps keep them healthy by insuring the breeding of the strong.

Wolves also help feed other animals. When a wolf kills and eats, he sometimes can't eat it all. This leftover feeds animals such as the buzzard, the possum,fox, coyotes and eagles. They help keep the forest clean by removing the sick before it can spread.