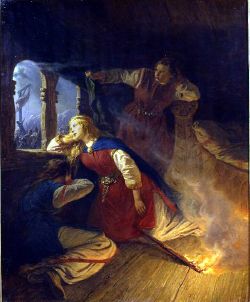 She was the daughter of Volsung, a descendant of Odin. Married against her will to King Siggeir, she tried to warn her father and her ten brothers about his plot against them, but she and her brothers were ambushed in a forest and bound to a fallen tree. Each night a wolf devoured one of them in turn, until only her youngest brother Sigmund was left alive. Signy got a slave to smear Sigmund's face with honey so that the wolf would lick him instead of biting him. Sigmund was thus able to catch the wolf's tongue in his teeth and overcome the beast. Signy helped Sigmund to plot revenge. She even slept with him in disguise and bore a son named Sinfiotli. When Sinfiotli grew up she placed him in Sigmund's care, but they were both captured by Siggeir. A magic sword freed them and killed Siggeir and his sons. Signy chose to die herself in the burning palace, but not before she had told Sigmund the truth about Sinfiotli's parentage.