Two pretty girls lived not far from Rabbit and Wolf. One day Rabbit called upon Wolf and said, "Let's go and visit those pretty girls up the road."

"All right," Wolf said, and they started off.

When they got to the girls' house, they were invited in, but both girls took a great liking to Wolf and paid all their attention to him while Rabbit had to sit by and look on. Rabbit of course was not pleased by this, and he soon said, "We had better be going back." 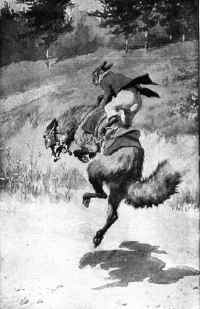 "Let's wait a while longer," Wolf replied, and they remained until late in the day. Before they left, Rabbit found a chance to speak to one of the girls so that Wolf could not overhear and he said, "The one you've been having so much fun with is my old horse."

"I think you are lying," the girl replied.

"No, I am not. You shall see me ride him up here tomorrow."

"If we see you ride him up here," the girl said with a laugh, "we'll believe he's only your old horse."

When the two left the house, the girls said, "Well, call again."

Next morning Wolf was up early, knocking on Rabbit's door. "It's time to visit those girls again," he announced.

Rabbit groaned. "Oh, I was sick all night," he answered, "and I hardly feel able to go."

Wolf kept urging him, and finally Rabbit said, "If you will let me ride you, I might go along to keep you company."

Wolf agreed to carry him astride of his back. But then Rabbit said, "I would like to put a saddle on you so as to brace myself" When Wolf agreed to this, Rabbit added: "I believe it would be better if I should also bridle you."

Although Wolf objected at first to being bridled, he gave in when Rabbit said he did not think he could hold on and manage to get as far as the girls' house without a bridle. Finally Rabbit wanted to put on spurs.

"I am too ticklish," Wolf protested.

"I will not spur you with them," Rabbit promised. "I will hold them away from you, but it would be nicer to have them on."

At last Wolf agreed to this, but he repeated: "I am very ticklish. You must not spur me."

"When we get near the girls' house," Rabbit said, "we will take everything off you and walk the rest of the way."

And so they started up the road, Rabbit proudly riding upon Wolf's back. When they were nearly in sight of the house, Rabbit raked his spurs into Wolf's sides and Wolf galloped full speed right by the house.

"Those girls have seen you now," Rabbit said. "I will tie you here and go up to see them and try to explain everything. I'll come back after a while and get you."